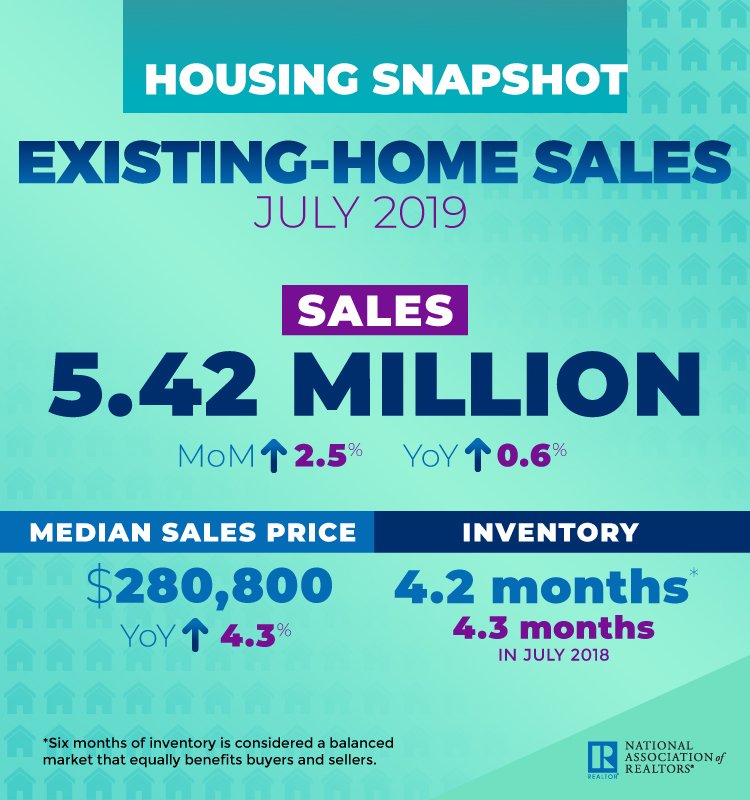 Home-Buying Ramps Up on Rates

“Falling mortgage rates are improving housing affordability and nudging buyers into the market,” explains Lawrence Yun, chief economist at NAR. However, while “mortgage rates are important to consumers…so is confidence about the nation’s overall economic outlook. Home-buying is a serious long-term decision, and current low or even lower future mortgage rates may not in themselves meaningfully boost sales unless accompanied by improved consumer confidence.”

Challenges continue on the inventory side, as well, which could hinder progress, Yun says. According to NAR’s report, inventory in July slid to 1.89 million, down 1.6 percent year-over-year.

Additionally, in an analysis of 13 of the largest markets in the U.S., entry-level homes purchased in 2012 and sold in 2018 appreciated more than 100 percent in at least four: Atlanta, Denver, Miami, and Tampa, according to NAR researchers. In that same time, higher-end home prices rose slower, compounding first-time homebuyer woes.

“The shortage of lower-priced homes have markedly pushed up home prices,” says Yun. “Clearly, the inventory of moderately-priced homes is inadequate and more home-building is needed.”

Choices could open up this year, according to Yun, thanks to FHA’s finalizing of a new rule, which is anticipated to boost condominium inventory—a critical gateway for homebuyers.

“Some new apartments could be converted into condominiums, thereby helping with the supply, especially in light of new federal rules permitting wider use of Federal Housing Administration (FHA) mortgages to buy condo properties,” Yun says.

“This change will begin benefiting buyers, sellers, and our members as soon as this fall,” says NAR President John Smaby.

Currently, inventory is at a 4.2-month supply, the report shows. In July, the average listing was on the market for 29 days, two days longer than the prior year. Fifty-one percent of homes were on the market for less than one month.

Of July’s sales, 4.84 million were single-family—a climb from 4.71 million the month prior. Condo and co-op sales totaled 580,000, a 3.3 percent decrease year-over-year. Nineteen percent of sales were all-cash, and 11 percent by individual investors or second home buyers. Two percent were distressed. First-time homebuyers comprised 32 percent of sales.