Vietnam War: He earned the Medal of Honor, died – Few Noticed. You’re a 19 year old kid. You are critically wounded and dying in the jungle somewhere in the Central Highlands of Viet Nam . It’s November 11, 1967. LZ (landing zone) X-ray. Your unit is outnumbered 8-1 and the enemy fire is so 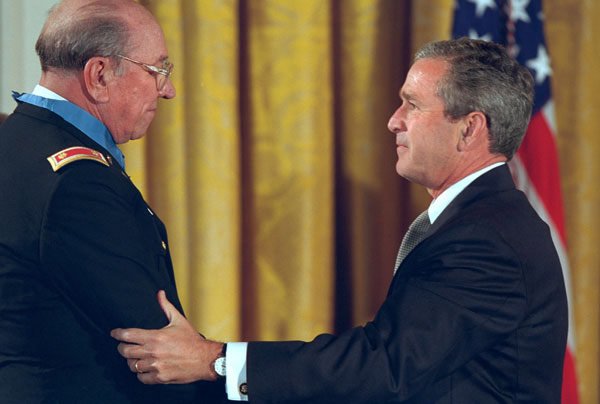 intense from 100 yards away, that your CO (commanding officer) has ordered the MedEvac helicopters to stop coming in. You’re lying there, listening to the enemy machine guns and you know you’re not getting out. Your family is half way around the world, 12,000 miles away, and you’ll never see them again.

As the world starts to fade in and out, you know this is the day. Then – over the machine gun noise – you faintly hear that sound of a helicopter. You look up to see a Huey coming in. But.. It doesn’t seem real because no MedEvac markings are on it. Captain Ed Freeman is coming in for you. He’s not MedEvac so it’s not his job, but he heard the radio call and decided he’s flying his Huey down into the machine gun fire anyway. Even after the MedEvacs were ordered not to come. He’s coming anyway. And he drops it in and sits there in the machine gun fire, as they load 3 of you at a time on board. Then he flies you up and out through the gunfire to the doctors and nurses and safety. And, he kept coming back!! 13 more times!! Until all the wounded were out. No one knew until the mission was over that the Captain had been hit 4 times in the legs and left arm. He took 29 of you and your buddies out that day. Some would not have made it without the Captain and his Huey. Medal of Honor Recipient, Captain Ed Freeman, United States Air Force, died Wednesday, August 20, 2008, at the age of 80, in Boise, Idaho. He was laid to rest at the Idaho State Veterans Cemetery in Boise.

We didn’t hear much about this hero’s passing, We’ve heard plenty about murders, Health Care, Border security etc. BUT NOTHING ABOUT THE PASSING OF Medal of Honor recipient Captain Ed Freeman (call sign Too Tall). Perhaps it wasn’t sensational enough for the media because it was just another old soldier. In my opinion – Shame on the media ! Now… We can honor this Hero internally. Like usual if our military brothers and sisters are not involved – It doesn’t get done. Hoorah!

This act of courage earned Major Freeman the Flying Cross and decades later, the Congressional Medal of Honor. He was a veteran not only of Viet Nam, but of World War II and Korea.

He was the recipient of the Congressional Medal of Honor for his actions on November 14, 1965, at Landing Zone X-Ray, in the Ia Drang Valley of Vietnam.

During the Vietnam War Freeman served as a helicopter pilot with the rank of Captain in US Army’s Company A, 229th, Assault Helicopter Battalion, First Cavalry Division Air Mobil. He was a 1st Sgt. in the Korean War where he received his battlefield commission.

It was on July 16, 2001, Congress awarded the Medal of Honor to Freeman with the persuasion of Lieutenant Colonel Bruce Crandall, other survivors who were rescued by Freeman, and Senator John McCain.

More than 30 soldiers survived because of Major Ed Freeman’s bravery. Now his watch is over, Taps has played for you the last time, so rest in peace brother. We’ll all meet again at or final RP.

Photo by: “Ed freeman 2001” by Original uploader was Nv8200p at en.wikipedia – Transferred from en.wikipedia. Licensed under Public Domain via Wikimedia Commons.