Leon Kent, Who Stopped Line of Tanks at Battle of the Bulge, Dies at 99 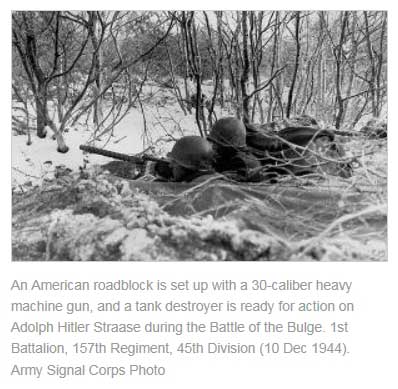 World War II Battle of the Bulge Leon Kent Dies 99. In the first desperate hours of the Battle of the Bulge in December 1944, a young Army lieutenant was given an order that seemed impossible: stop a fast-moving column of German tanks from advancing.

“Anti-aircraft gunners, who stayed behind when the infantry withdrew, played a vital role in preventing a major German breakthrough in Belgium. … One battery, commanded by Lt. Leon Kent of Los Angeles, knocked out five tanks, including one King Tiger tank, in two hours.”

Our WWII veterans are dying at a rate of more than 600 a day.

Leon Kent was one such WWII veteran.

The three soldiers received Silver Stars for bravery. Kent, who stayed beside his men during the fight, was meritoriously promoted to captain. He was supposed to receive a Silver Star, but the paperwork was lost. In 1998, at the nudging of a congressman, the oversight was corrected and the award bestowed.

Kent, who returned to a career as a lawyer and bowling alley owner after the war, died Feb. 12 in Beverly Hills, his home for several decades. He was 99 and had pneumonia, his family said.

He always downplayed any sense that he had acted bravely during that attack. But he never dismissed the danger that his soldiers faced from German tanks.

Leon Kent, Who Stopped Line of Tanks at Battle of Bulge, Dies at 99 | Military.com 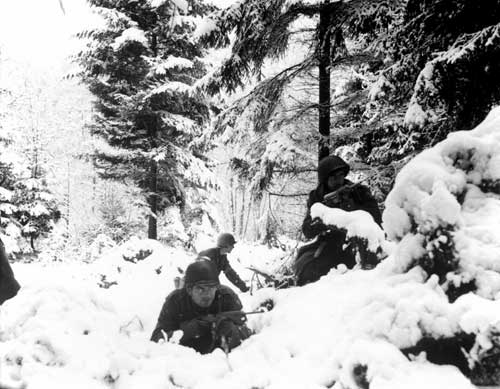 Battle of the Bulge WWII

"If they got one shot at us, we were dead," he told the Los Angeles Times in 2011. "I remember thinking: Do the shells go through you or do you go up in pieces?" By stopping the German column, Allied troops who had retreated were able to regroup and begin countermeasures.

"What Capt. Kent showed was extraordinary leadership," retired Army Maj. Gen. John Crowe said before a 2011 ceremony at the December 1944 Historical Museum in La Gleize, Belgium. "He wouldn't ask his troops to do anything he wouldn't do himself. That's the kind of leadership that inspires troops." After the war, local residents erected a plaque that, in French, reads:
"Here the invader was stopped."
Leon Earl Kent was born June 23, 1915, in New York. He graduated with honors from Dartmouth College in 1935 and Yale Law School in 1938. He moved to Los Angeles in 1939 to practice law. Kent and his brother Jack opened a bowling alley, Trojan Bowl, near the University of Southern California. It stayed under family ownership until the 1960s. Neither brother was a bowler, but they sensed a good investment. While helping to run the bowling alley and practicing business law, Kent was drafted in 1942. He was assigned to a California-based unit, the 143rd Anti-Aircraft Artillery Gun Battalion. In Paris, he met a young French woman, Simone. They were married, also in Paris, in 1945. Resuming his law practice after the war, Kent was involved in tax cases and entertainment and copyright law. His clients included Clayton Moore, who played the Lone Ranger; Lou Costello of the comedy team Abbott and Costello; and Pilar Wayne, wife of John Wayne. He successfully represented American playwright and screenwriter Emmet Lavery in a copyright case in a court in Paris. Back in Southern California, he became an attorney for the Grandview Building Co. and Budget Rent-a-Car.Leon

In the 1960s, Kent worked with the dean of the UCLA Law School to help admit more minority students. He was chairman of the Lawyers and Civil Rights Committee of the Beverly Hills Bar Association.
In addition to his wife, also known as Monette, Kent is survived by daughter Lynette Kent of Huntington Beach, Calif.; son Paul Richard Kent of Edmonds, Wash.; four grandchildren and two great-grandchildren.

About that day he was given a suicidal-sounding order to stop the enemy, Kent was blunt:

"We stopped them cold."

Lt Leon Kent was awarded the Silver Star for actions above and beyond the call of duty.

Article Provided by: Stars and Stripes

Leon Kent, who stopped a line of tanks at Battle of the Bulge, dies at 99 - Veterans - Stripes