The Greatest Generation is Fading Rapidly – WW II Veterans – The sights, the sounds, the joy, the pain, the horrors and the victories of World War II are disappearing at an alarming rate. According to the US Veterans Administration, around 600 WWII veterans die every day.

So, let’s take a peek at a few of these folks, to not only thank them for sacrifices and service, but to also recognize the footprint they have laid within our principle of freedom.

It was in April 1943 that a recruiting poster for the Women’s Marine Corps Reserve caught her eye.

Within a month Frances Hoffman was neck deep in boot at the Marine Corps’ new Camp Lejeune in Jacksonville, North Carolina.

She successfully completed the Combat Rifle Program, even learned “to rappel down the side of a ship,” she said, before adding, “It was very hard, physically demanding. We weren’t used to that sort of thing.”

Hoffman, now 85, sells tickets in her free time at the WWII Museum in New Orleans. She can still be heard cheering “Semper Fi” to fellow leathernecks. 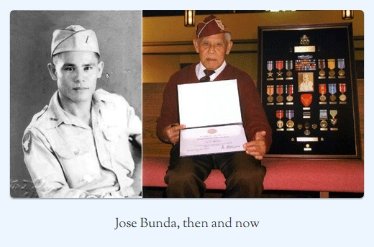 Jose Bunda, joined the Army when he was just 18. In 1942 like many of his peers, he was quickly shipped off to the war.

Within weeks of reaching the Pacific, he was taken prisoner on Corregidor. From there he survived the Bataan Death March, escaped his captors, joined local resistance, and lived in the jungle fighting the Japanese until the war ended in 1945.

Bunda retired in the early 1970’s to be with his family having served for more than 30 years. Among his military medals are the Silver Star, Bronze Star, and the Prisoner of War medal. He died at home in 2012 at the age of 99. Scottie Eldon Ooten, a member of the 84th Infantry Division, first stepped foot on European soil in November, 1944 – only months before WWII came to an end.

During his time overseas, he experienced the Battle of the Bulge and witnessed firsthand the fall of the Siegfried Line. Ooten was also part of the group that freed several thousand Jewish prisoners from Sachsenhausen concentration camp in Salzwedel, Germany.

Ooten says of his encounter with the prisoners at Salzwedel that “They were just … tickled to see us.”

His military awards include both the Bronze Star and the Purple Heart. Edward Matthew Gibson Sr. first saw service in 1942, where he trained at various airfields. Eventually he made his way to Alabama’s Tuskegee University. He was quickly promoted to 1st Lieutenant, and then transferred to Fort Knox, KY. There he served as a bombardier navigator in the 477th Bombardment Group, 616th Squadron. Although one of the most highly schooled bomber squadrons of perhaps the entire conflict, the war ended before they were to be deployed.

In 2007, Gibson and the remaining Tuskegee Airmen were called to the Capitol Building in Washington D.C. where they were awarded the Congressional Gold Medal in an honorary ceremony.

Gibson was one of the last three Tuskegee airmen in South Carolina. He died in July, 2012 at the age of 89.

In reference to their father, Gibson’s four children still call themselves, “The Fortunate Four.” WW II Veterans Even though Grace Aiko Obata Amemiya was forced to live in an internment camp because of her Japanese heritage, she says today that she holds no bitterness toward the United States government.

Instead of choosing defeat when she left the camps on April 26, 1943, she chose St. Mary’s School of Nursing in Rochester, Minn. There, she joined the cadet nurse corp program. As part of the program, Amemiya was required to continue being a nurse, and did so happily, until the war ended in 1945.

Today, at the age of 91, she lives with her family in Minnesota.

In the time of Zoot Suites, the refrigerator, radio, the Jitter-Bug and skyscrapers, America’s youth had many things pressing on its collective mind; but the most pressing thing of all was the war. And though it mattered not whether politics, greed or ulterior motive influenced the military girth of the United States, the men and women of 1940s America joined together in a valiant campaign to rid the world of tyranny and oppression once and for all.

Now they are leaving us… and with them goes the anamnesis of our Greatest Generation.

Share with with us your stories of WWII veterans from the Greatest Generation at Jeff@LuxuryValleyHomes.com. We would also like to hear about our Korea and Vietnam veterans.