A Bit of History on the Traditional Thanksgiving Dishes 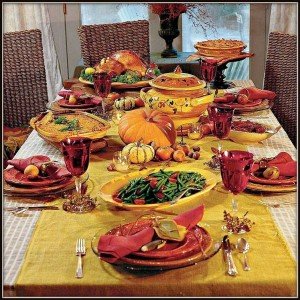 A Bit of History on the Traditional Thanksgiving Dishes

In the U.S., the Thanksgiving celebration is on the fourth Thursday of November. Because this is a meaningful celebration, most of us want to spend the day with our loved ones. No matter how far away we are from our family, we have this firm longing to travel long distances just to be with our families.

Traditional dishes are a large part of the Thanksgiving celebrations and most families include the entire family members in the food preparation. While these traditional foods have been prepared in every Thanksgiving dinner table every year, one question came to mind, why do we eat what we eat at Thanksgiving?

Whatever we prepare for the Thanksgiving celebration, simply enjoy the delicious taste of the traditional Thanksgiving foods and its colorful history. And don’t forget to give thanks to God wholeheartedly just the way pilgrims did on the first Thanksgiving.

Females Are Making It a Priority to Invest in Real Estate!

Females Are Making It a Priority to Invest in Real Estate!

Are We About to Enter a Buyers’ Market?

Are We About to Enter a Buyers’ Market?