Royal flush, straight flush, full house, three of a kind. Does it ring a bell? If so, then this is for you: there will be another tournament in the Valley happening this 25th of October in East Camelback Rd  Scottsdale AZ: the Beanie Wells Poker Tournament. As the name suggests it will be hosted by the well-known National Football League and Arizona Cardinals player no other than Beanie Wells. 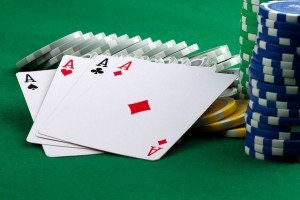 This is no ordinary tournament rather a good cause for a part of the proceedings will be donated to Make-a-wish Foundation of Arizona. Attendees of the Beanie Wells Poker Tournament will play their chance to win the grand price $10,000.00 seat at the World Series of Poker or two (2) seats to Super Bowl XLVII in New Orleans.

All eligible adult Texas Hold ‘Em poker enthusiast are invited to join the Beanie Wells Poker Tournament and play with the celebrities and world renowned athletes in this friendly match and at the same time support the Foundation. For registration, there will be a pre-event buy-in donation starting at $175.00, however, if you miss the pre-event donation and decided to register on the day itself, a walk-in registration fee will be at $200.00 or your can either opt for a VIP buy-in of $250.00.

For the benefit of those who does not know how to play Texas Hold ‘Em Poker, the game consists of two cards being dealt face down to each player and then five community cards being played face-up by the dealer with the player having an option to check, bet, raise or fold after each card deal. The objective of the game is to compete for the amount of money called “pot” contributed by the players itself.

Make-a-wish Foundation of Arizona on the other hand, began in 1980 in Phoenix when a little young boy being treated with leukemia made a wish to become a police officer for a day. The Officers did not deny the child’s wish as they made plans of making this simple wish came true. Not only the boy experienced a tour in the city in the DPS helicopter, he was also awarded as the first and only honorary DPS patrolman in Arizona state. Yet, it doesn’t stop there, a custom-tailored uniform was made for the boy to complete the “feel” of being a police officer.

It may be just a simple wish, but for the boy it means internal happiness. It lifted his spirit giving him hope, strength and joy. And from this humble beginning, the Foundation has grown into a world-wide wish granting phenomenon.

And so this coming Thursday’s event, remember more than your presence in the Beanie Wells Poker Tournament and playing to get the winning price, a more intense reason for you to be there is the opportunity to help these children who in their young age faces the battle of a life threatening medical conditions.